…aaaaaaaaaaaaaaaaas! That’s how you say thank you like a local in Tokyo. Make sure you drag that final vowel sound right out until you need to catch another breath!

As we sit here on our first Shinkansen fast train trip, hurtling through Japan’s many towns at 270 kph en route to Kyoto, I thought it’d be a good chance to go through some of Tokyo’s MANY suburbs that we had a chance to visit this past week. I knew that coming from the Central Coast, with a population of around 320,000 to the world’s biggest city (sit down for this…33 MILLION, almost twice the population of the whole of Australia!) would require a change in pace, but I don’t think we realized how pacey it would actually be until we were crushed in a train on the Yamanote line, with potentially half of that 33 million! We have loved the movement, the crowds and the hustle but have also been a little stressed. And my feet are sore.

There have been SO many cultural differences so far, and I’ll do a “what I hadn’t realised” post soon. But one overwhelming thing we noticed, that with all of these people crammed into this massive metropolis, how eerily quiet it often is. There aren’t many cars around, so there’s not the honking “always traffic jam” you see in many other big cities, with motorists honking every two seconds (I’m looking at YOU Bangkok!), and motor bikes buzzing noisily past. Trains are king, and in the countdown of the 50 busiest train stations in the world, all but 6 of them are in Japan. Almost half in Tokyo. Shinjuku station (which we navigated, but would never hope to master), entertains 1 million commuters PER DAY, and annually sees 1,260,000,000 pass through. Apart from train travel, it’s a bicycle city, and they are piled high at the stations and apartment blocks, usually without bike locks.

Yes, after just over a week, we (kinda) had this sussed…

So I guess the lack of road action is one reason why it’s quiet here. But then there’s also the rare gift the Japanese have for actually respecting their surroundings and the surroundings of others. There is no loud talk on the trains. In fact phone conversations are not allowed…texting only. There is no OTT laughing or raucous tomfoolery among teens. It’s zen. There is NO yelling.

Except for the shop assistants in HARAJUKU screeching like yapping puppies from the moment you walk in until the moment you walk out. Not AT us, not at anyone really. Not angrily or happily, just yelling what I’m assuming was “look at the bargains we have in store today”, while they vigorously fuss about, moving hangers here and there and yelling some more. The high pitched nasal whine, teamed with the non-stop Euro-mixed beats of Disney tunes (imagine the “Winnie the Pooh” song sped up 5 times, with a thumping drum behind it), and the dark lights and baby bright clothing. Lordy, it was a headache waiting to happen.

You’d have heard of this odd fashion mecca via Gwen Stefani no doubt. She sings about the “Harajuku Girls” in a few of her songs, and when you think of weird fashion movements in the world, I’m sure you picture one of these girls dressed in a mish mash of styles. Takeshita-dori, the main shopping street in Harajuku is their home.

What we didn’t realise is how serious some of these Harajuku girls take their place in the fashion landscape. They don’t just roll up on a weekend to pose: they live their Sweet Lolita, Gothic Lolita, Wa Lolita or Decora lives every day. These four styles can be seen, in order, above (not my pics). There are about ten sub-categories of Lolita dressing…it’s a sartorial minefield. To be honest, we were expecting much more Lolita action on the streets, but in the throngs of a Sunday afternoon, we only saw about 30 of them, and were too embarrassed to ask to take photos.

Check out this video. It’s not fancy dress. It’s every day...

Milana was busting to find an Sweet Lolita frock, and we discovered two of the leading Lolita brands are “Baby, the Stars Shine Bright” and “Angelic Pretty”, but their dresses (and the undershirts, head band thingos, and shoes, all teamed up to make a “co-ordinate”) cost a fortune. When I discovered “Body Line” in Harajuku on-line, with cheaper knock offs, we were super excited. Milana found 2 suitably puffy, frilly, princessy frocks for who-knows-what occasion, as well as lacy wrist cuffs, strawberry shoes and a strawberry handbag. Avalon found a cute dress too, but the darker gothic styles which she loved the look of were a little too hard-edge for her in the end. They also had racks of Cosplay gear, school uniforms, Disney type, Victorian style and nurse and maid dresses, which you could easily get away with wearing here without a second glance, but would look like you were off to an adults only fancy dress back home. 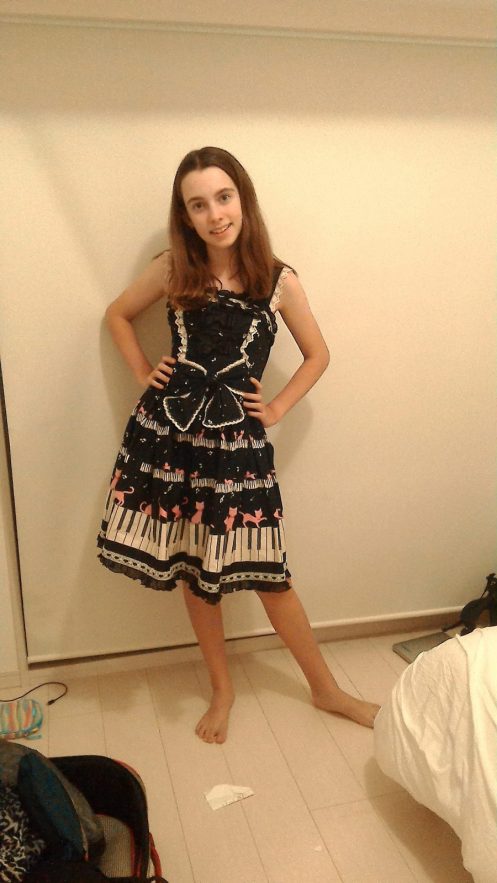 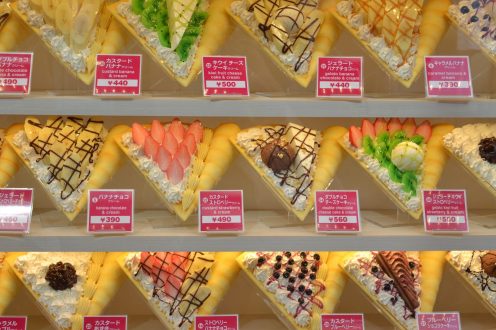 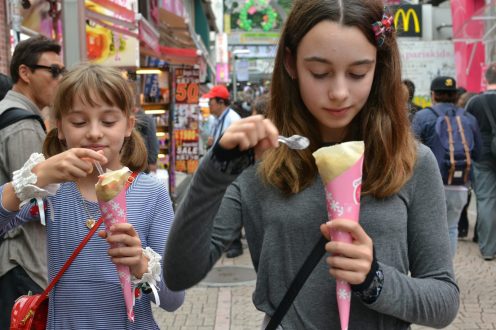 Also in Harajuku is Yoyogi Park a gorgeous tree covered space housing Tokyo’s largest shrine, Meiji-jingu. It was near empty, and to have that much green in the middle of the city was delicious. 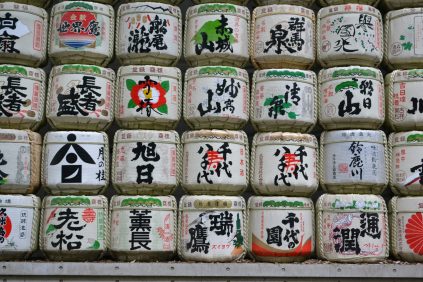 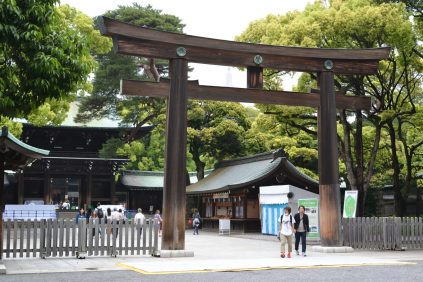 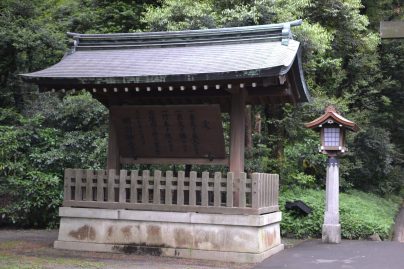 We’ve learnt so much about some of the Shinto and Buddhist rituals this trip. Cleaning our hands and mouths at the entrance; not walking directly through the centre toroi gates of a temple (that’s where the gods walk); and writing your wishes or prayers on an “ema” and tying it to the wall. (I hope Emily got that dress!) 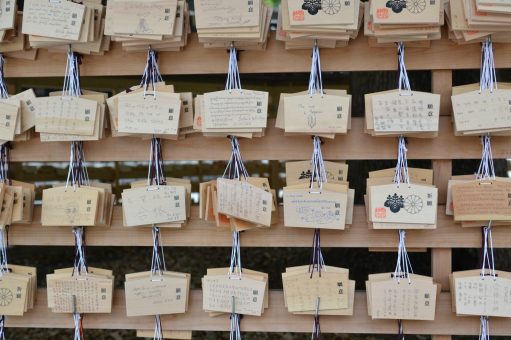 SHINJUKU is just crazy huge. When you think you’ve found the hub, there are another 6 blocks of it! Neon lights, people on a mission (probably to and/or from a train station), and tall buildings hiding who-knows-what on each floor. Restaurants are often hidden away on upper floors, and unless you can read Japanese, you’d have no idea.

Tokyu Hands was our first port of call…a fabulous department store selling homewares, toys, gadgets, stationary and hardware. We bought the girls a bento box each, with the intention of occasionally packing a traditional Japanese lunch of rice and sides in little sections for school. Bento boxes rock, and take-away versions containing rice, meat, pickles and vegetables are available everywhere. A lunch favourite!.

We hunted down a dark “yokocho” (alleyways with small restaurants), Omiode Yokocho, or “Memory Lane”(aka “cockroach alley”, sounds promising!) for dinner. 60 tiny restaurants are jammed into 4 crisscrossing alleyways, lit by lanterns, and the glowing of the yakitori coal burners. We ordered a selection of skewered treats – chicken, spring onion with bacon, peppers and giblets, soaked in an amazing sauce. The dark little restaurant sat only 10 people along the bar and was filled with smoke from the grill, and smoke from the businessmen’s cigarettes. But it was goooood. 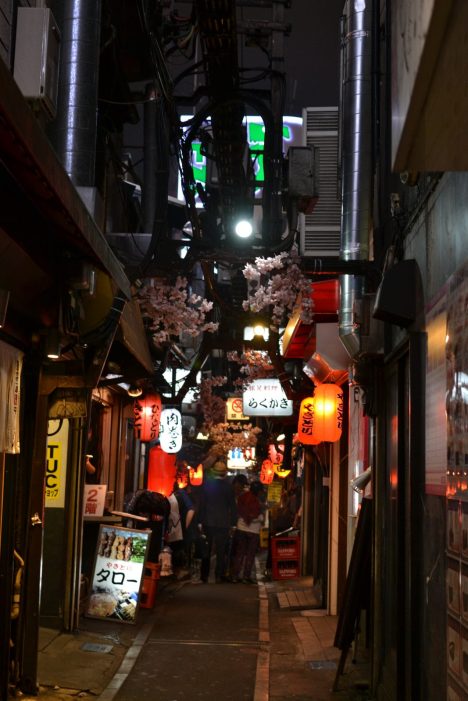 SHIBUYA holds the honour of having the world’s busiest intersection. Around 2,500 people cross at each signal change. Here’s a bit of an idea.

We didn’t really spend long in this part of town. It just felt like a REALLY big Sydney, with Japan’s equivalents of Myer and DJ’s. Except each store was ten times bigger. And on every corner. For blocks.

We visited noisy market stalls and spent WAY too long in a 6 story toy shop in UENO. I had to hold myself back from buying every kawaii stuffed item in there. Of COURSE I need a Totoro watering can, Hello Kitty purse and Gudetama coffee mug! We wandered through the untouched-by-time areas of YANAKA, that somehow managed to survive earthquake and WWII destruction. The whole area was still and quiet, and filled with humble timber homes, temples and cemeteries.

We bumped into a middle aged American tourist standing in the grounds of one of the temples. He yelled “So, are you guys checking out the houses too?” Us: “I think you’ll find this is a temple” (why he’d be strolling through someone’s private garden is another question!). Him “Yeah, my hotel told me to come here and visit” Us “Yeah, it’s one of the oldest parts of town, not hurt by the war”. Him “War? What do you mean? We Americans never bombed Tokyo. Why would we do that? No, haha (condescending baby boomer smirk on face), I don’t think so.” Okaaaaayyyyy then. Us “Well, also, the earthquakes…” Him “Earthquakes?! Really! I had no idea”. Our cue to leave him to float through his trip in his very thick bubble. 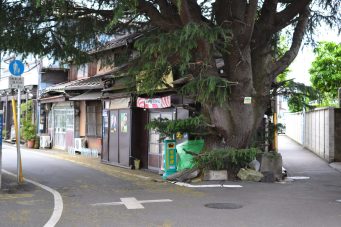 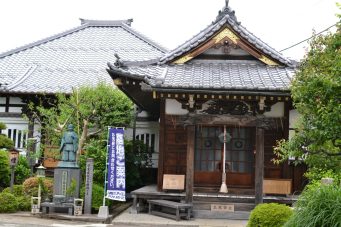 Black crows picked at the flowers at the grave yards in Yanaka, and their eerie calling along with the, gentle hum of traffic in the back ground, and the clacking of the wooden grave markers (“sotoba”) being buffeted by the wind made for a haunting scene. Mangy one eyed cats peered through the stone statues at us, begging us for SOMETHING to eat. 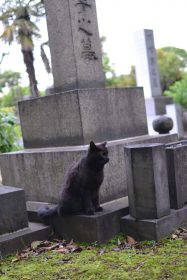 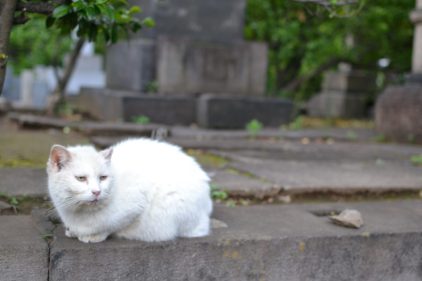 “Our” suburb of ASAKUSA, along with Yanaka, was probably my favourite. It washed a stillness over us after diving into the turbulence of the big city. Our apartment was across from the most lovely temple we’ve seen so far. Not the most elaborate, or well known. But surrounded my mossy rocks, a little battered and worn, with lovely trainees selling o-mijuki (the paper fortunes) there every day, it felt serene. The adjoining park was a bit scruffy and overrun, but some of its visitors were intriguing, like the amateur camera club which would meet and play with a pin hole camera, taking and developing their photos in a bucket, and chatting over it for hours. We did our own stealth spy camera-ing from the balcony. 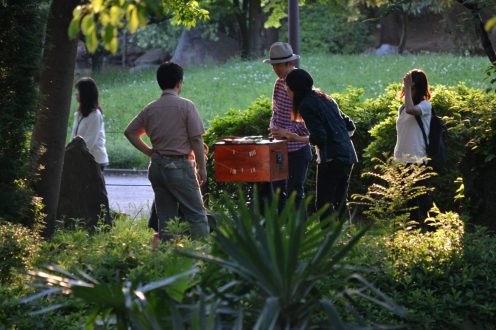 Tokyo Skytree was also a ten minute walk from our place, and a glimpse of it in our travels meant we weren’t too far from home. 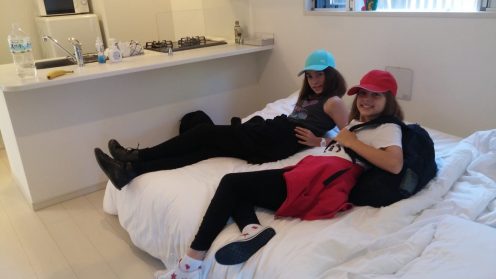 Phew! That’s sure a lot of site seeing, so arigato gozaimaaaaaaaaaaaas Tokyo, we’ll see you again, albeit briefly, in 10 days time!