Seeing one of the world’s most famous paintings, one that has inspired beauty, photography and other artists for centuries, begins with a jolt, and then warms all of your senses. It’s like meeting a long lost relative that you’ve always KNOWN has existed through photos and maybe a chat on the phone, but then seeing them in the flesh takes the experience to another level. 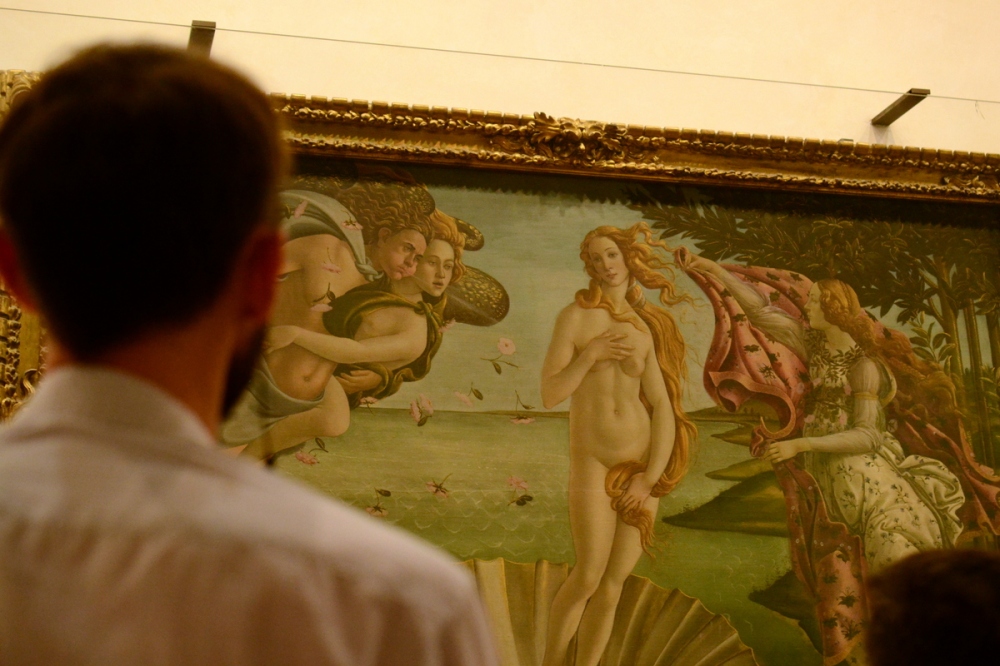 When most people see the Mona Lisa for the first time in Paris they get that feeling, although it’s usually fleeting, as it’s a brief glimpse of the tiny smiling woman behind glass before you’re shuffled on.

Cam has loved Boticelli’s “Birth of Venus” (1486) for years, and seeing her at Florence’s Uffizi Gallery was set to be a highlight. We pre-booked an entry time, bought the girls a kids’ guide book so they’d know which were the “must see” paintings (and to give us a bit of Medici family history beforehand), and after a quick flirt with the security guard after I buzzed at the metal detector “You are a very terrible woman…with very beautiful eyes…are these girls your sisters?”, we were in.

Personally, I love a lot of the religious artwork on the cusp of the Renaissance – the gold leaf back grounds and, compared to Da Vinci or Michelangelo, a little more primitive, before perspective and texture were so perfect. When the artwork was more about educating the masses than pleasing the rich.

Boticelli was one of the early Renaissance artists, and we love his paintings. The faces of the gods/goddesses and mere mortals seem almost vacant, but there is so much movement and expression filling the frame. Even the girls were excited to see the original “Birth of Venus”. They’ve attempted to draw her a couple of times at home, and who wouldn’t love a picture with flowing long blond hair on a beautiful naked woman, angels above, Springtime offering a robe, and flowers floating in the air! Cam was in lurve.

As with most touristy areas in Florence, the gallery was filled with (groan) tourists, mostly in their massive packs following the floating tinselled antenna/flag/umbrella/plastic flower. The girls settled themselves onto the couches in the Boticelli room and sat for about 30 minutes looking around the room and sketching their favourite pics. There were generally three reactions from punters who saw “Birth of Venus.” Those who were hit by the “OMG, It’s HER, and I’m HERE” feeling; those who were beastly careless, and were only there because the tour guide told them they should be; and then, this poor pathetic group, who will now take up far too much space in this post, but the plight of their ignorance must be highlighted.

Couple 1: American, mid 20’s maybe on their honeymoon, both vigorously chewing gum, snuggling up sharing one audio guide. Him “Yeah, it says this one is supposed to be kinda famous. I guess we should stop and take a look.” Yeah. I guess you should!

Couple 2: American. Middle aged. “I just don’t understand why THIS Venus has arms, but the sculpture doesn’t”. Good Lord.

Couple 3: (For the purpose of this exercise, you must now adopt a strong cockney car-salesman type accent. Make it convincing, like you’re selling a vegetable-curling set with free steak knives on Swanston Street.) English. Middle Aged. “Yeah Love, that there’s the Venus de Meelo. You know ‘er Love, you’ve seen ‘er before hasn’t ya? The Venus de Meelo that is. You know her?” “No love. Never seen ‘er before in me life”. It took every bit of strength in my body to not shout “It’s not the flippin Venus de MILO you fool. That’s a statue, and yes, she has no arms as they fell of, and she was created over 1000 years earlier, and is now in the Louvre. Now PLEASE vacate these premises, in fact, this COUNTRY, IMMEDIATELY.

Where have these people been?

Here are some of my other favourite paintings…Giotto, Raphael, Boticelli and Martini