There are so many reasons why you’d want to go to Florence, and just one why you wouldn’t. Pros? The art. The food. The history. The celebrations. The desire to create, and be surrounded, by beauty. The con? Tourists. 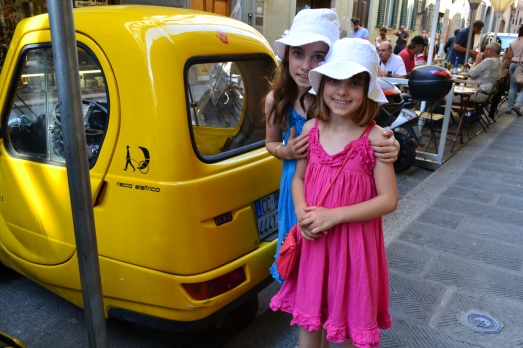 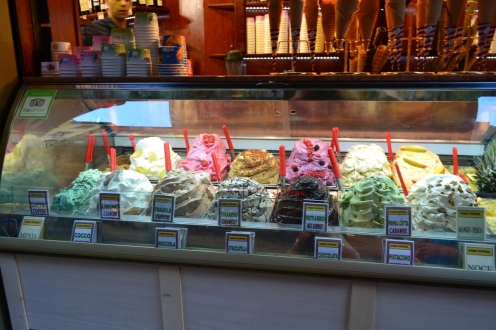 We’d just come from 2 weeks in Umbria, where we’d often be the only people in a church. The only people in a restaurant. Apart from Assisi, which has a regular stream of wanna-be pious folk, travelling, parking, buying tickets, eating, was all casual, relaxed and easy. And then there was Florence, with long snaky queues outside everything, whether you’d pre-purchased a ticket or not. Duomo? Didn’t end up going inside because of the queues. Accadamia? Queues. Uffizi? Well we did that because the pre-booked tickets had start times, but we still queued for a bit. The whole town was bursting with tourists, mostly in fat packs. 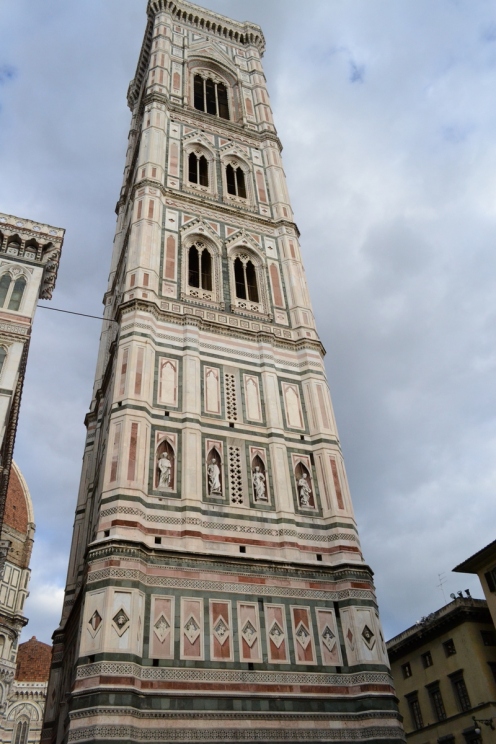 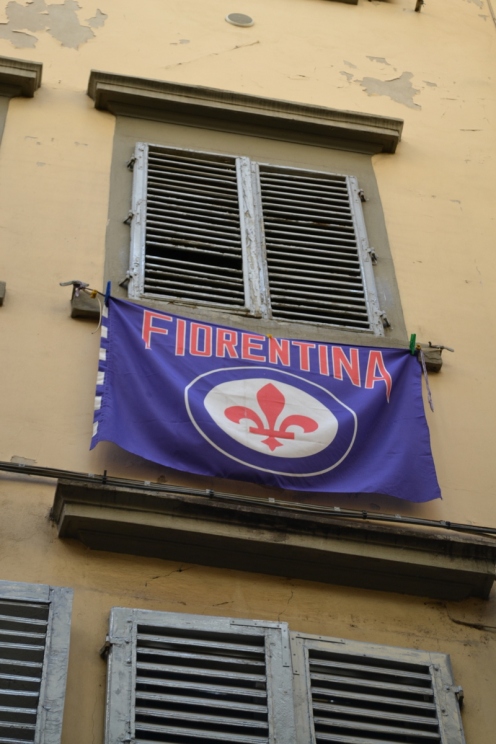 But there were also lots of young, funky Firenze locals about. On night one, after we’d driven for a few hours, battled the skinny ZTL (Zona Traffico Limitato) streets in the centre that led to our apartment; squeezed into a car park that was more the size for a Vespa; and carried 4 suitcases and 3 crates of food up to our fourth floor; we thought we’d pop out, still in our comfy, daggy car clothes, to check out our area. It was a Thursday night. And every street, every square, every shop was packed to the brim with cool hipster-type guys with beards, rolled up skinny pants and boat shoes; and beautiful girls with far-too-much make up on, and far-too-tight mini dresses. Apparently (and I wish we’d got the memo earlier) it was Vogue Italia’s “Fashion Night Out”, and there were guest DJs in the shops, free champers, roped off celebrity areas, and leggy models striding metres above all of the tiny Italian girls.

Next day, we made our way to the Mercato Centrale to grab some bits for lunch. Fresh bread, prosciutto, carciofi (artichokes) and salad. Perfect for a throw it together picnic in a piazza! It was about half the size of the Queen Vic in Melbourne, and we really are blessed with a great variety of cuisines and choices in Australia. So while the food looked amazing, most of it (wild boar salami and endless trays of porcini mushrooms and truffles excluded) was similar to the gourmet fare produced by foodie types at home. 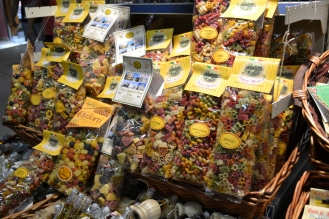 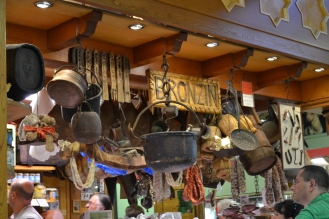 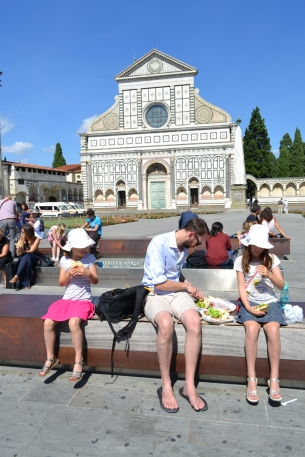 I was convinced I was going to find a perfect new “me” fragrance while in Florence, and was hoping it would be found at the “Officina Profumo-Farmaceutica di Santa Maria Novella”. Just rolls off the tongue right?! In 1221, Dominican monks established the shop, cultivating herbs in their gardens to prepare ointments and balms for the sick, and as word spread, popularity grew, with the monks eventually creating their products for members of the public, and for royalty, in Europe and around the world. Somewhere along the line, colognes, soaps and body products were added to the range, and now the blissfully fragranced boutique shop is filled with older American, and younger Chinese tourists buying up big! I’m not sure what they were buying however, because while the overall smell in the place was astounding, every single perfume I tried smelt like a mix between 4711 (remember that stuff) and toilet freshener. Not the scent I was going for! 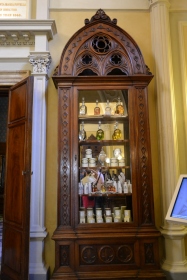 One of the highlights for the girls was a Kids’ Museum family tour of the Palazzo Vecchio, once home to the powerful Cosimo de Medici and his hundreds of children (11) to stunning Spanish wife Eleonora. The tour was designed especially for kids 8 and under, and our guide Florinda had a bag filled with show and tell goodies to keep our girls and the one other little girl on the tour, Christina also from Sydney, entertained. Florinda explained who was who in the paintings, told us about life in the palace for the Medici children, showed us around Eleonora’s wing of the palace, through Cosimo’s rooms, and then into his Hall of Maps, where Europe’s geographical knowledge of the world at that point was painted on panels all over the walls. It was here that Florinda posed a question to the girls. Which panels led to closet space, and which panel led to a secret passageway that would take us into a private costume chamber? A secret door! Every kid’s dream.

They sussed it out, and we got to duck behind the barriers, open the secret panel, and creep down into the dark staircase that led to the costume room. With the girls used to hearing  “non toccare!” in most galleries and museums, they were thrilled to be able to not only touch, but try on silk, brocade and velvet copies of costumes worn by the Medici kids. There were some of their nursery items- cots and walkers and toys, as well as gowns and hunting gear of their parents. A great fun afternoon, and the family we spent it with were wonderful too. 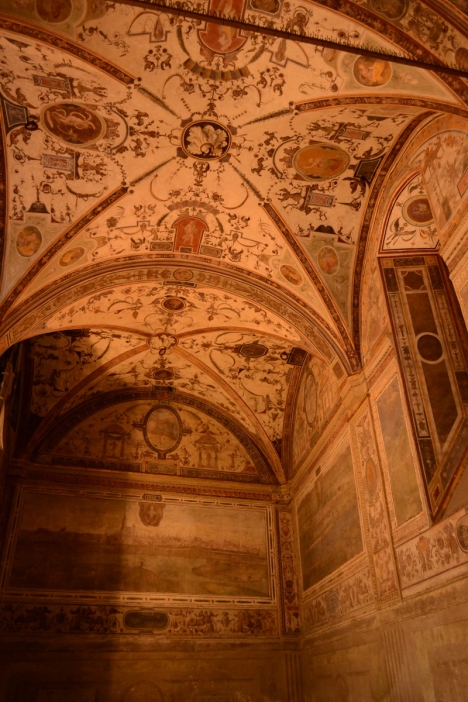 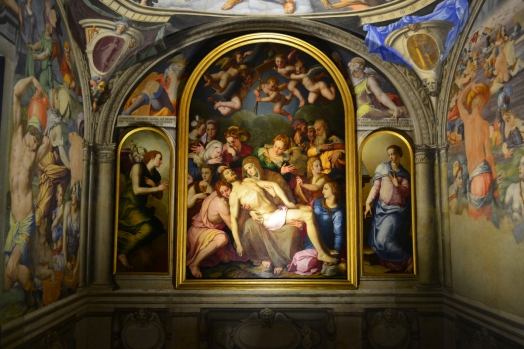 The Ponte Vecchio is Florence’s jewellery bridge, but in the day it was covered in butcher shops, who would throw the left over meat at the end of the day into the Arno river below. Mmmm, must’ve smelt pretty meaty down there! It seems that artisan jewellers of the past have moved on, because it was more like a bunch of over priced chain stores (pun intended), with identical rings and necklaces in each shop. And at outrageous prices. Give me second hand any day! It was also bizarre seeing the exact spot Cam, as Ezio Auditore in “Assassin’s Creed 2”, brawled with one of the powerful Florentine families of the Renaissance. He’s brave my husband! 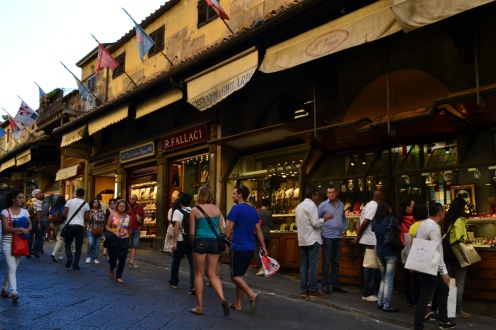 We had the chance to catch up with my wonderful Auntie Isla and her partner Michael a couple of times. They’re doing a trip around Europe at the moment as well, and Cam was desperate for a mannish conversation with another manly man which could include megabyte type talk without getting a perplexed look of confusion, or a “can you talk my Lalaloopsy” in return. Coincidentally, one of my Bangkok uni friends, Jan, was also in Italy with her sister Mylee, and we had dinner together for the first time in about 15 years. The people you meet! And my Florentine food of choice? Ribollita, a delicious thick soup that I’ll be trying out when we get home. 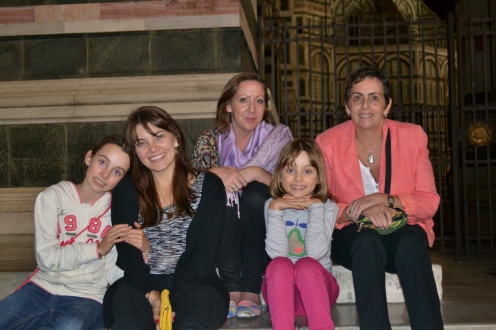 The memory that will stay with me the most will be sitting in our apartment with a glass of wine and seeing the Duomo lit up above the Florentine rooftops, with a street jazz band playing below on most nights. It seemed our bedroom was a story above everybody else, and in each window was framed a different panorama of this vibrant, cultured city. Che fortunati che siamo! 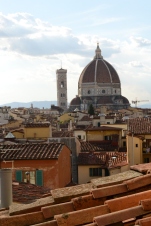