With the Ionian Sea side of the Salento ticked off, our skin screamed “more sun per favore!”, so we did the drive East to the Adriatic. There are just so many amazing beaches to choose from here, and thankfully all of the ones we chose were more or less sand free!

We passed through the miles of desolation again to reach the water. The half finished factories. The empty warehouses. Past flat towns of white boxed apartments stacked on top of each other, with aerials poking from their rooftops and peeling welcome signs. Past SO many olive trees, more cacti, and roads lined with piles and piles of rubbish. Not just the lazy aqua frizzante bottle or grissini box; but whole bags filled with trash. Everywhere. Really disgusting.

This was a tiny spot barely marked on our map, but what a find! The sea was turquoise blue, and so clear. The little bay was sheltered by a cliff that you could ascend, and then climb into the water via attached step ladders. Unfortunately, the water and the wind were freeeezing, so we only stayed for a quick swim. 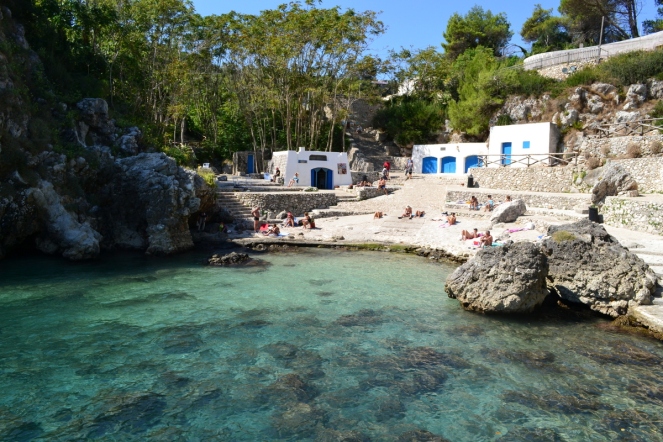 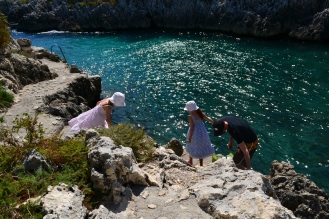 There are claims this cave was lived in by some of the earliest inhabitants of the area, with vases and weapons dating back 5000 years found inside. We were greeted by an old guy smoking and grunting “di la” (or “could you kindly wait for me over there please”), and then taken inside for an all-Italian 20 minute tour. We learnt how old it was (mumble, mumble), who found it (grumble, grumble), and where to leave our tips (over there in the bucket thanks). Apart from the usual cavey suspects (stalactites and stalagmites), there was also some old graffiti left by a bunch of guys who scooped a lot of the innards out to fertilize their crops; and a school of rare blind un-pigmented prawn thingies. Fascinating. No. Not really. At least Cam found the girl in the red bikini swimming near the cave entrance semi-entertaining.

Santa Cesarea looks over the old baths that have crumbled into the ocean. She’s running from her nasty father who apparently met his fate in one of the town’s boiling thermal pools. Ouch! The town has been a spa centre since the 1500’s, although it felt like some of the steps and arches we swam around were from Roman times. The girls loved it, and named it their favourite Italian beach so far. See! No sand is a good thing! 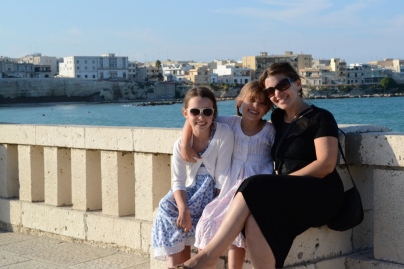 Otranto Cathedral’s 12th century floor is covered with an enormous tree mosaic, with creepy animal figures (the monk who organised it clearly had never REALLY seen an elephant before) and odd characters doing odder things. More creepy still is the chapel dedicated to the 813 Catholic Martyrs of Otranto who were canonized earlier this year by Pope Francis. The legend goes that in 1480, 18,000 Ottoman invaders stormed the city and found a group of Christians hiding in the Cathedral. When they refused to renounce their religious beliefs, the church was turned into a stable, the frescoes were destroyed, and the 813 were systematically beheaded. Their bones are stacked up in glass cabinets behind Mary’s alter. The stone which was used is also on display. 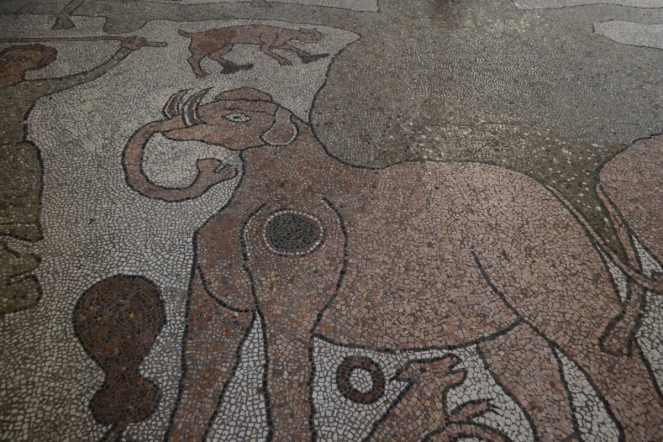