Yesterday was the day Milana was born for. A day dripping with cutesy, “kawaii” fluffiness, dipped in sugar and syrup and injected with baby pink fairy floss and pixie dust.

We visited Sanrio Puroland, aka Hello Kitty Town, about an hour’s train trip from our home base. Milana was all nervous and skitty all morning, desperate to get there, while Avalon had her arms crossed most of the morning, wishing the whole experience away. Until we got there.

The Sanrio folk know how market their wares. I doubt there’d be anybody on this planet who wouldn’t recognize that fat faced, bow headed Kitty. Getting off the train, we were greeted to Hello Kitty elevators, Hello Kitty train ticket machines, and Hello Kitty train gates. A ten minute walk, and there in all its sparkling splendour was the all indoor park. 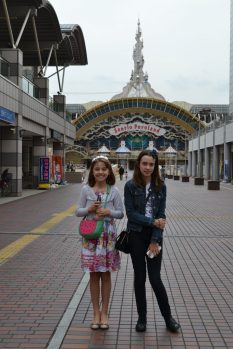 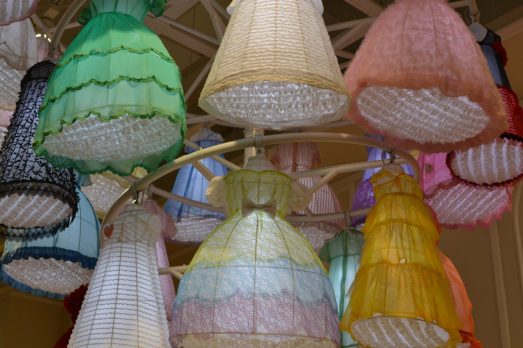 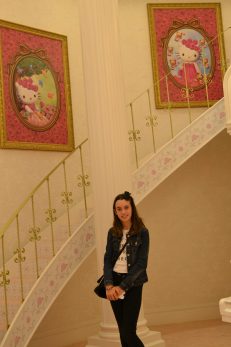 It was hard to know where to look. Seperate rooms shot off from a central square housing an enormous tree covered in glowing Hello Kitty bows. There are other Sanrio characters peeking out from every corner. Little Twin Stars, My Melody, Cinnamoroll and Bad Badtz-Maru (and the stable of over 400 Sanrio characters) might not be that well known in Australia, but go for a stroll through Sydney’s China Town, and the “cutey shops” (our terminology) there are teaming with their merchandise.

Avalon’s attitude was really turned around when the four of us boarded a mini train ride (designed for 4 year olds) that rode through a tunnel of various characters. The whole experience was so bizarre, the four of us were crying with laughter.

You really couldn’t help but smile the whole time. Cuteness overload with dressed up characters performing under the big tree (all in Japanese, so a good chance to skip to the front of the line for main attractions), posing for photos (OMG Cinnamoroll was the cutest dressed up character thing I have seen in my life!), and being cheeky (Bad Badtz Maru ran away from his minder, and grabbed Milana’s watermelon handbag, and tried to peck at it…until I scolded him “naughty penguin!”)

There was Lady Kitty’s House, and a chance to meet Lady Kitty herself; loads of fun photo booths with the characters, an excellent boat ride that wound around the whole funpark, and told the story of Hello Kitty and Dear Daniel’s wedding (total brain-frying kawaii attack); and my favourite part, the hilarious themed food options. Cam’s ramen had a slice of fish sausage in the shape of Kitty and seaweed paper (nori) stamped with Little Twin Stars. Milana’s Muchy Crunchy Kitty Curry included a mini hot-dog branded with Kitty’s head, Avalon’s curry was My Melody’s head, and my curry included a salmon steak with a face on it. 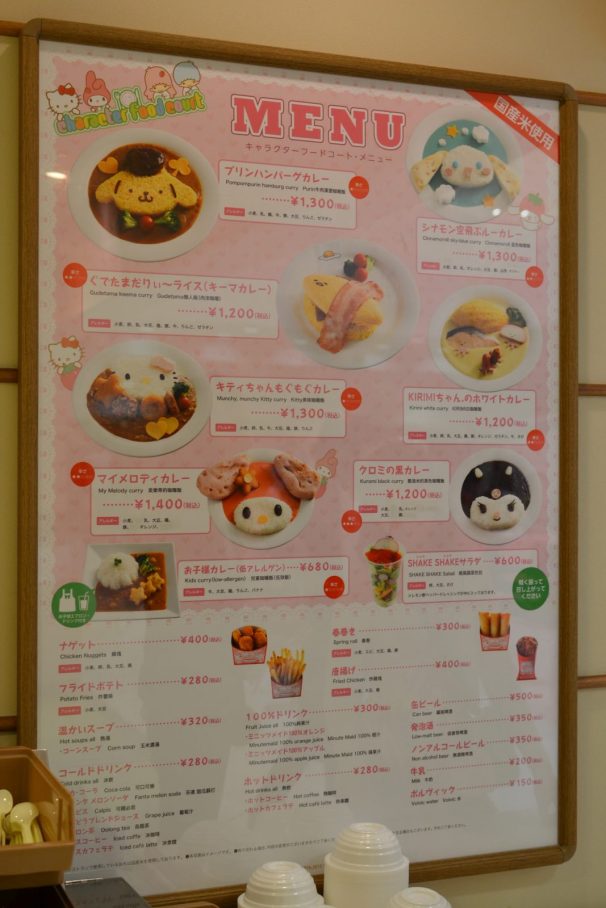 Now, about that. While most of the characters are super cute, there were a few food related ones that I found plain odd. The smiley face salmon steak, Kirimichan, “A star in the sliced fish world”, and his soupy friends, a happy pork cut and a chirpy slice of fish sausage (what!?), who seem contented with their culinary fate. And the super DUPER weird Gudetama, an apathetic egg yolk who lazes around complaining, and sleeps under a warm bacon blanket. You don’t reckon it’ll take off? Well the 250 episodes of his minute long cartoon would say otherwise! Take a look…

Just let that sink in for a bit… Don’t like it?

Moving on. As luck (and outrageously cheap Qantas deals) would have it, our Coastie friend Glenn and his family are here at the same time as us! He organised an amazing dinner out, with his wife Deb, their adult kids and his mum, and three expat friends who have lived in Tokyo for around 15 years a piece. They had booked a private room at an “izakaya”, a gastro-pub type set up designed for dinner and drinks after work. There were loads of Japanese business men in suits letting their hair down ready for the weekend, and our rowdy group of 13, all being treated to some of the freshest, most melt-in-your-mouth sashimi I have ever tasted (some of which was grilled at our table with a blow torch); chicken grilled on sticks; a salad which involved the pulping of some sort of root vegetable in a textured salad bowl with a big pestle, and then tossing it with the salad and a sweet dressing; and cheesy croquettes.

One of their friends Wendy is a High School English teacher here, and asked the girls on camera to ask a question about life in Japan to her class, she’ll email back the responses, with some questions from her class about our lives in Australia… and hopefully we can get a bit of cultural sharing going on!