Everyone loves a mystery. A puzzle to solve; a riddle to answer; to awaken their inner Columbo.

Our apartment in Munich served up such a puzzle. The guy that owns this apartment, and 3 others in the building, doesn’t actually live here, so the problem travellers face is, how to get the keys? Arranging a pick-up point is filled with pitfalls. Delays, mis-communication, emergencies. So, how to safely get those keys in your hand?

Step one. Look for a bike. Not just any bike. A blue bike chained at a given corner. We didn’t realise however that Munich is TEAMING with bikes. People ride them everywhere, so most street corners house at least 20 of them. The girls scoured our corner, and Milana has said finding the bike has been her highlight of the trip so far. Could have saved a vast amount of cash if we’d have known this would be her highlight!

Next, we were given a secret code that would open the aluminium box on the back of the bike.

Inside were four mini safes, each labelled with the apartment names and each with their own password – the final four numbers of our booking code. We cracked open the inside lock…and BAM, a set of keys.

Next, approach the door (the block had about 6 different doors) with the rectangular panels. Hold the clicker on the keyring exactly at arm-height close to the left of the door to get into the building.

When you get to the landing, go down one floor.

Open the metal door at the bottom of the stairs. This leads to two more doors. Use the green key to open the door to the left, NOT on the right. That door leads to an old bomb shelter.

Use the pink key to open your apartment. 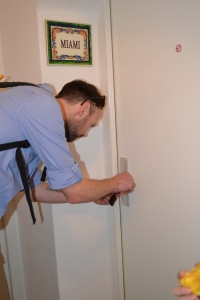 And, hey presto you’re in! 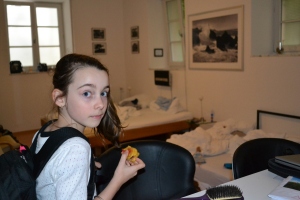 Then, (and we added this particular step), jump out of the window, and play in the neighbour’s yard. Very quietly.