For Year 12 Italian, we studied Carlo Levi’s 1945 novel “Cristo si e Fermato a Eboli”. Levi was an Italian writer and anti-fascist activist who was exiled to a remote area, now known as Basilicata, in Italy’s South in 1935. There, he encountered people living in poverty unknown and unheard of in Italy’s north. Whole families, with their animals, were found living in caves; often the same dwellings inhabited by their parents, their grandparents, and theirs. Most were uneducated and many were ill. Children often died young and without medical support. We visited Matera, the inspiration for his novel; a book that helped bring the secrets of the south onto a worldwide platform. Secrets which became known as “La vergogna d’Italia”, or “The shame of Italy”. By the 1950s, the government forcibly removed people from their cave-dwellings in an attempt to hide their now public poverty. There is a rich and sad history to Matera, but it is inspiring and beautiful.

“In the Sassi caves is concealed the capital of the peasants,
its heart hidden in their ancient civilization.
Anyone who sees Matera cannot help but be awe-struck,
so expressive and touching is its sorrowful beauty.” Carlo Levi 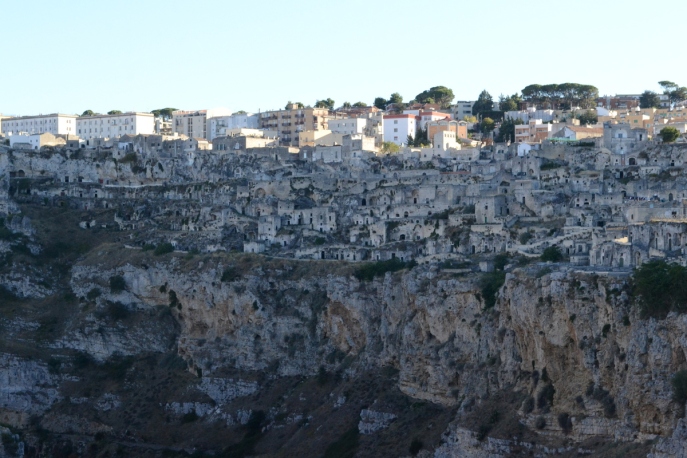 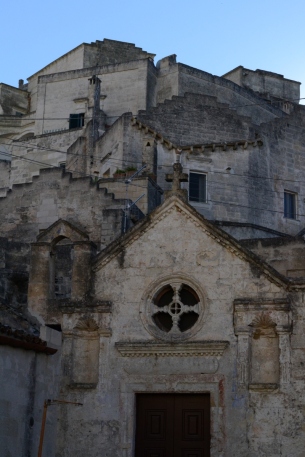 People have been living in the soft tufa stone caves of Matera for around 350,000 years. The stone is easy to carve into, and in the heavy heat of summer, it offers cool relief. The Romans were here. Monks lived in grottoes and cut churches into the rock. People eventually put facades on houses, but go through many front doors of this UNESCO World Heritage town, and you’ll find a cave behind it. Many films, including Mel Gibson’s “The Passion of the Christ” have used the town as their version of ancient Jerusalem.

When I first saw the basin of Matera covered in these amazing neutral buildings, my head felt light, and my heart fell heavy . So many layers, stacked Escher-like one atop the other. There are some basic caves – rock and dirt on the hills which are clearly now just used as teen hang-outs. There are archaeological zones which are still being sorted through; and then the newer areas which have been converted into restaurants and hotels. And frescoed cave churches, slowly being swallowed by mould and damp. 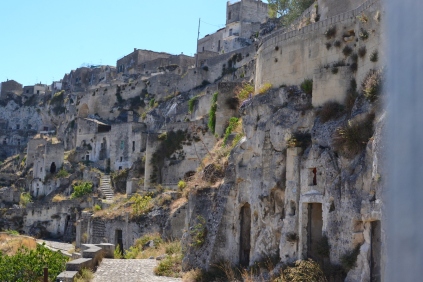 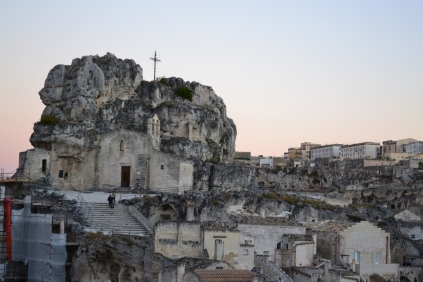 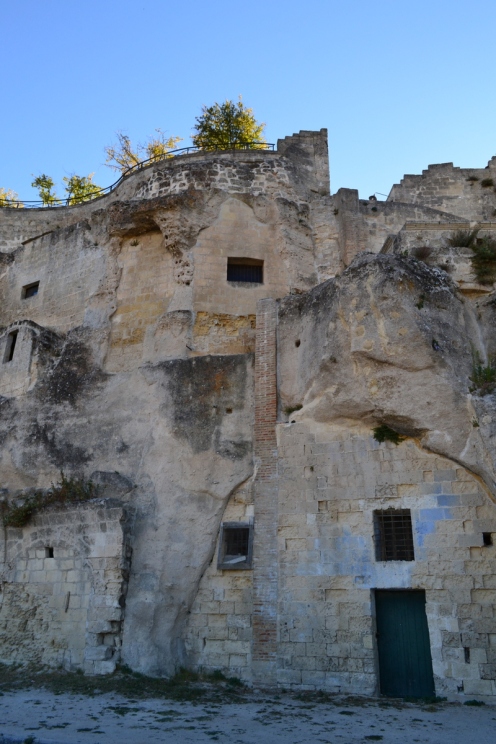 If you’ve never slept in a cave before, I highly recommend it. It’s cool, still and oh-so-quiet. The girls thought they were the luckiest kids in the world – sleeping in a CAVE! There were perspex panels in the floor where you’d look down deep into another cave below us. They’re usually decorated with cute star or spiral shaped vents which help with air flow.

I feel so lucky that we had the chance to visit now, before Matera becomes more well known around the world. It was a definite highlight of our trip, and an experience we’ll never forget.